- August 10, 2009
Noob Killer by Leerz is a simple but effective virus removal tool that I frequently use on my computer repair jobs. Easy to use, fast, lightweight and like I said, effective. What more can you asked for? 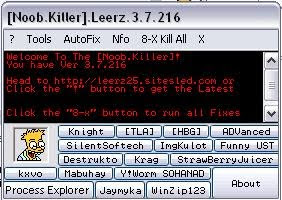 You will need the VB6 Runtime Environment as this program was written using Visual Basic program, if not you will receive this error when trying to open the program:

NOOB.KILLER.leerz.exe - Unable to Locate Component
This application has failed to start because MSVBVM60.DLL was not found. Re-installing the application may fix this problem.


Noob Killer Description:
Noob Killer by Leerz most recent version is able to pick up and remove the following annoying viruses:

How to use Noob Killer by Leerz:
1. There are several files at the noob killer folder. You need to run NOOB.KILLER.leerz.exe
2. Update the program if you are not sure that you are using the latest one. Select X at the toolbar and select Live Update Now!
3. After updating, click 8-X Kill All and it will scan for all possible virus infection it can get rid off. Remember that it will restart your computer after that so you need to save all your work prior to running Noob Killer by Leerz.

and a virus that replicates any opened folder

Arun s said…
Can anyone help me out with the usb autorun.inf virus generating folders slatko and razlog on usb flash drive and portable hard disk. I kno to temporarily remove it but it autogenerates wen i plug in my usb. I formatted every drive reinstalled os and still it's dere. Wat to do? I used every virus remover tool i can get. Still no use. Pls mail me @ aaronraiden@yahoo.co.in if u have a solution.....please:(
February 20, 2010 at 4:55 PM

happygoth09 said…
I've got Noob.Killer 3.7.270 the 3.7.216 was obviously outdated, the new versions was hard to find and still O_O I'm searching it Noob Killer Juicer was definitely a light and good anti-virus!

@Mhagz
try in safe-mode then go to regedit, search those names like 'NUDE TEEN VIDEOS.vbs' then delete those strings that matches with that malicious .vbs file.