How to check if your PSP can have CFW installed

I’ve been receiving tons of questions on how to check if their PSP can have custom firmware installed. Here’s a complete and concise guide to get you going. Make sure to read through the guide fully since it will answer all your psp motherboard related questions.

First of, you need to understand that there are three types of PSPs:

So why install Custom Firmware on a PSP?

People install Custom Firmware so they can run Homebrew, programs developed by people that don’t have a contract with Sony. A PSP with Custom Firmware could also back up your games from the UMD to your computer; it also allows you to play those backups from your Memory Stick (MS). You could also do some serious customizations to your theme. Basically, you free your PSP from the hands of Sony.

Why can’t I install Custom Firmware on my PSP?

Your PSP probably has a TA-088v3 (Found in some 2000 series units) or TA-090v2 (Found in all 3000 series units) motherboard, which are, to-date, still aren’t supported by the current Custom Firmware versions so you can’t install it on them.

From here on, Here’s some clarifications:

All 1000 Series (or PSP Phat) PSPs are crackable to date. You can use Pandora and an MMS to install Custom Firmware or some other method.

The 2000 Series is a split family. It has 3 generations, differentiated by the motherboard installed on them.

So if you have a PSP Slim and don’t have TA-088v3 motherboard, rest assured that you can install Custom Firmware on it.

All 3000 Series (or PSP Brite) have the TA-090v2 Motherboard, which is still unsupported by Custom Firmware. Sony has made the latest iteration of the PSP hardware secured under a bigger lock and key. A few enterprising people claim to have the PSP-3000 hacked but it’s nothing more than smoke and mirrors.

Here’s a list of all the Motherboards made & released by Sony: 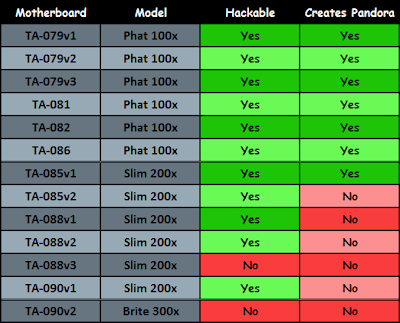 We all know how to tell if a PSP is a PSP 1000 because of it’s bulk. The same goes for the 3000 Series because of the PSP-3000’s features. What’s difficult is telling if your PSP Slim (PSP-2000) can have Custom Firmware installed.

Here’s 7 ways to tell if you can install Custom Firmware or not:

1) What is the Firmware the PSP came with?
The original firmware that came with the PSP right out of the box is an indication of its Motherboard, & here’s the list:

If you’ve bought a PSP with Official Firmware higher than 4.01, chances are it doesn’t support Custom Firmware, any attempt to install it will be met with a Game could not be started error.

Note: If you updated the PSP or the PSP you’ve bought has been upgraded before you got your hands on it then you need to find out what was the first firmware installed on it as the list above only applies to said version.

2) What is the PSP’s Serial Number?
The Serial Number is found on a label where the battery is supposed to go. Refer to the picture below for a better illustration: 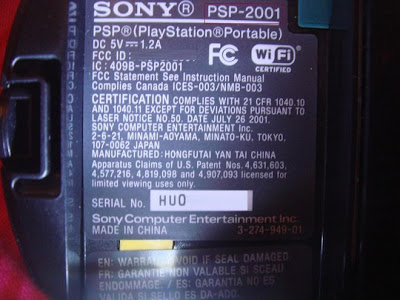 Note that this applies to Piano Piano Black PSPs (for now). If the serial starts with HU2, then the PSP most likely has a TA-088v3 Motherboard. Any other serial (Say starting with HC or HB or HJ) can have CFW installed.

3) What’s is the PSP’s Identification Letter
It’s the letter on a label on the box that indicates the version of the unit. A picture is shown below: 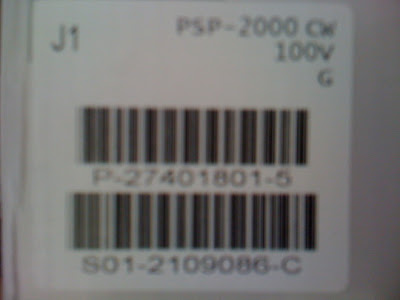 Note that this label is only present on the normal PSP box and not those large “Limited Edition” ones.

Anyways, See the G there?

That G is the letter in question. Here’s a list of all the letters that the 2000 series ship with:

If the letter is absent or is from A to F, then you can install Custom Firmware. If it’s a G then you can’t. 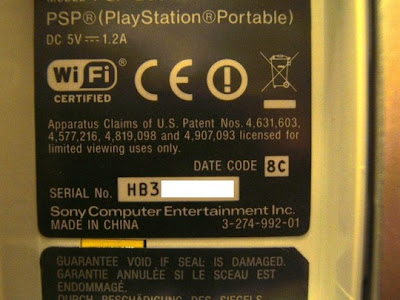 6) Got a limited Edition PSP?

Now, if you’re still not sure how to proceed, ask a friend who’s familiar with Custom Firmwares to check for you. If you have a suggestion or a question, just post a comment.
How To's PSP

Anonymous said…
yes you can but it depends on when you purchased it, if it was in 2008 than for sure you can, if it was this year than you will have to check some of the other identifier methods (I have one myself thats how I know, got it Dec 08).
June 29, 2009 at 1:09 AM

Kevin said…
The information seems to be helpful but I still have a question. I have a psp Piano Black and the only way I can check it is step two. What does it mean if the psp serial number I see that is similar to the picture? What if mine starts with HU0? Is it hackable? With what level of certainty? Any answers would be greatly appreciated.
October 22, 2009 at 4:23 PM

Anonymous said…
I have a Madden Limited Edition psp. Came out in november and bought it in october is it hackable
October 29, 2009 at 5:06 AM

Unknown said…
Is it definite that all star wars psp limited consoles have the following motherboard? TA-085v1 Motherboard? email
globalresgrp@gmail.com thanks!
December 8, 2009 at 9:23 AM

Anonymous said…
sir my psp was bought by my uncle in dubai, but i can't really trace what is its motherboard. could you help me try to figure it out by not depending on the labels outside? because i think my psp2000 has a different casing than what's in its internal hardware.tnx i need help pls.
December 8, 2009 at 3:29 PM

robbie said…
sir i think my motherboard is ta-088 v.3 and im using a chickhen w/ a firmware of 5.03 MHU but still i cant play other games, what happen is while playing sometimes my psp suddenly shuts off and my chickHen was disable what do you think is the cause of this incident? kindly email me at robbie_vargas69@yahoo.com tnx!
December 8, 2009 at 8:14 PM

Anonymous said…
I have a limited edition daxter psp I CAN HAVE CUSTOM FIRMWARE !!!!!!!!!!

Anonymous said…
I HAVE A PSP 2000 WITH TA-088V3 MOTHEBOARD. I INSTALLED CHICKHENR2. BUT AFTER A FEW MONTHS A PROBLEM HAS OCCURED. WHEN I ON GAME AND PRESS HOME TO EXIT THE RIGHT AND LEFT ARROW DOESNT FUNCTION ANYMORE.. WHAT MAYBE THE PROBLEM.. PLSSS EMAIL ME AT JEFSLS@YAHOO.COM
April 15, 2010 at 3:21 PM

Unknown said…
your post is to much appriciated for people like me that want to learn about cfw.. I have also psp1000 or fat comes from japan. i went to store where they sell service like installation of cfw, right now it uses cfw 5.50 gen d full.. now i want to know is how to install cfw and what are the tools needed in able to run this.. paying a psp technician is a pain ass thing cost they collect too much high price.. I understand a little program in pc, i can install costom roms on pda for your technical data so you can know my level of knowledge.. hope you can help me.. again thanks and more power! heres my e-add; jhaystyle88@yahoo.com
April 17, 2010 at 9:47 AM

Anonymous said…
hello, i bought a refirbished psp from china and im having major problems with it. system information says version 4.01 and i cant play any games from mem stick. i can only play umd. do i need to upgrade it? if so, what is the next upgrade for this. just to play games from mem stick will be fine. help me please
June 1, 2010 at 10:00 AM

Anonymous said…
I have a PSP 3006 with a serial number beginning with "HE"
Identification letter F
system software version 5.50
Update icon under Game Category saying "PSP Update ver 3.71"
Is there any way i can downgrade it so i can play games from the memory stick and also what steps should i take to do so?

Anonymous said…
Hello, i bought psp a year ago, the limited edition slim madden package.
My questions: Is my psp hackable i dont know the OFW, cause it has 4.01 m33-2 installed on it ?
is 4.01 m33-2 a CFW?
and if it is does it mean that my psp is hackable.

Thank you so much for these valuable information. It is really helpful.

I still have one more question to ask if possible.

I have a PSP 2000 that has a serial number starting with HB080... ,but the box contains the letter G, and I don't remember what was the first official firmware it came with.

My question is: Should my PSP meet all the conditions listed above to be hackable, or can I say it is hackable since the serial number starts with HB080???

Initially i have chickhen install, i accidently format it. I download chickhenR2 from the web, run it and PSP turn off. Unlike previously green screen appear. What should i do? i intend to fully hack it. can it, will i break it? Please help
February 21, 2011 at 10:14 PM

Anonymous said…
Hi.. I have a PSP 3006 with a serial number beginning with "HE"
Identification letter F
system software version 6.60
Is there any way i can downgrade it so i can play games from the memory stick and also what steps should i take to do so? pls email me at seriouslyme27@yahoo.com
March 16, 2012 at 4:16 PM

Deconandnos said…
Wow the ignorance on this comment board is amazing, why can't any of you do some simple research?!...first off...half the information the poster provided is incorrect...there are NO PSP-3000 models that can be hard modded..NONE! end of story

Unknown said…
Just recently bought another PSP and wanted to know something. My SN is HU8, is it still possible to install CFW or is it just with models that have HU2? Thanks in advance for any sort of reply. You can also message me over at mognes@live.com
January 7, 2014 at 1:31 AM